So, my research for the battle is ongoing as always... Some of the fruits of my digging recently are these nice copies of the battle from Theatrum Europeaum from the University of Augsburg's online document library. I am not aware of any copyright for these images so here they are.

Both images were drawn a number of months after the battle, and it is obvious that the artist (Matthaus the Elder Merian) must have visited the site as they are topographically very accurate (I should know as I walked the battlefield again a few weeks ago).

The first image below is the view of Chapel hill looking over the battlefield on the day before the battle. As we can see both the Swedish and Imperial armies kindly burnt down a number of the local villages during their respective marches, and the Swedes are alleged to have pillaged and burnt down the rest after the battle (according to local folklore the area was almost uninhabited for a few decades after 1645). 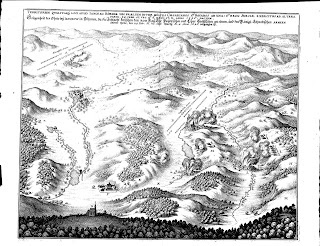 The second picture shows the closing stages of the battle as the Swedes pushed through the Hartmany wood. It actually captures a number of phases at the end, including the final unexpected Swedish attack as the light was falling, the capture of Hatzfeld and the rout of the Imperial army. 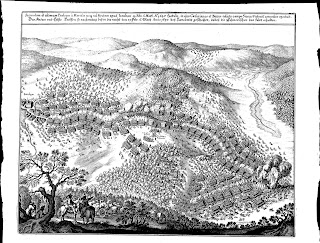 There were a total of five pictures of the battle, and the order of battle in Theatrum Europeaum, indicating the contemporary importance of the battle. The vantage point of the second picture was probably in the vicinity of the village of Nosakov, looking north to Jankov and Ratemerice.
Posted by The Wilde Goose at 11:08 PM No comments: