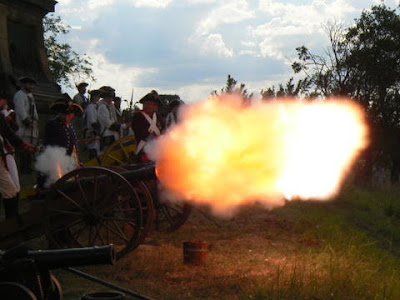 Today, after returning from holiday in Italy, Mrs. Goose, the wee one and I took a spin out into the Bohemian countryside. After a few days of heatwave, and the previous heat in Italy, we were blessed with one day of mild weather. We spent most of the day out in a lovely town called Kutna Hora, which is about 70km east of Prague, two images of which I include below: 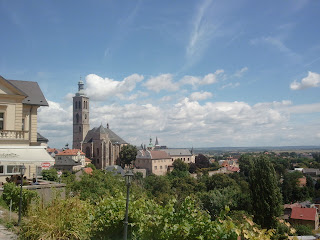 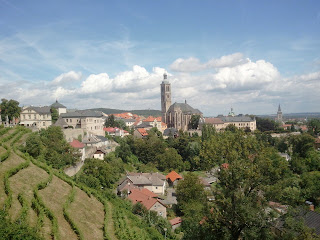 This really is a cracking little town, a virtually unspoilt mixture of Gothic, Renaissance, and Baroque architecture, the jewel of which has to be Saint Barbora's Cathedral. Anyway, by way of return, we took a detour via Kolin so that I could take a few quick pictures of the battlefield. Now I will try to spend a full day out in Kolin in the near future, and do a proper walk and photo shoot of the battle site, so these are just some quick preliminary highlights. 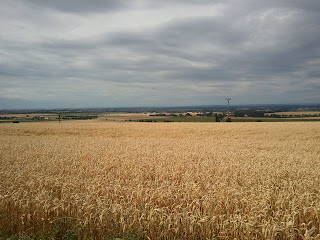 The battle took place on a ridge running West to East along the edge of a plateau overlooking the Elbe valley/flood plains to the North. The two main points are the Prerovsky and Krechor hills, which fixed the axis of the Austrian Battle line, which are about 700 metres behind the village of Krechor (where the main battle monument and an old Swedish fortified camp from the 30 Years' war are located). The logic of the battle was straightforward, Frederick and his Prussian Army had Prague under siege after defeating the Austrian Army of Von Browne outside the city. The second Imperial Army under Marshall Daun were marching to it's relief, and ostensibly to manoeuvre the Prussians into an ambush (for Daun had pre-picked this ground for his battle the previous year). 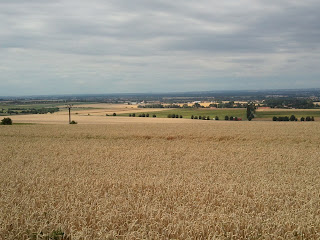 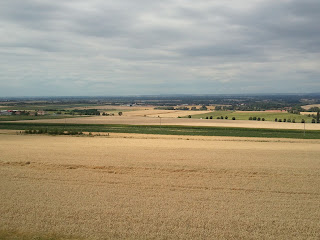 The pictures above shows the view from the Monument, looking down over grain fields to the old Kaiser Strasse (which you can see in the middle distance above), up from which the main Prussian attack came. This is more or less how the field would have looked on the day of the battle. The fields and the old Swedish camp were full of Croatian Grenzers, giving the Prussians a hard time as they sought to close with the main Austrian line on the ridge behind.

The advantage of the Austrian position was that as the Prussians marched up the hill, all they could see was the line of the hill where the Croatian Grenzers were positioned. This of course was a false ridge. The main ridge lay further back, with nearly 700 meters of dead ground in between, where Daun placed the bulk of his line. One can speculate that he fooled the Prussians (32,000 strong) into attacking what they though was a weak force, being fully committed before realising they were walking straight into the main Austrian army (with nearly 60,000 troops) 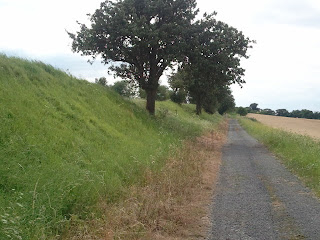 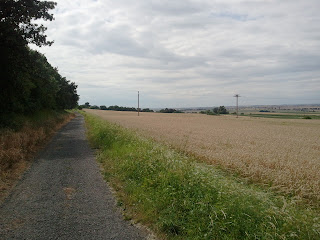 You can still see the height of the ditch of the old Swedish fortified encampment above. This ditch runs for nearly half a kilometre west from the village of Krechor, and gave the Croatian Grenzers great cover. The main battle monument is at the Western end of the ditch. 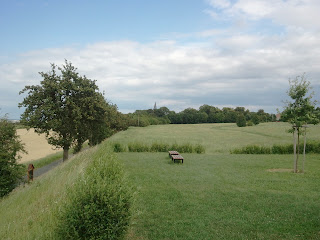 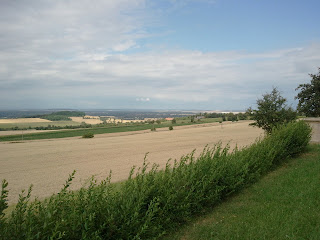 Looking from the top of the old Swedish camp North-East, Krechor Village is to the right of the photograph. 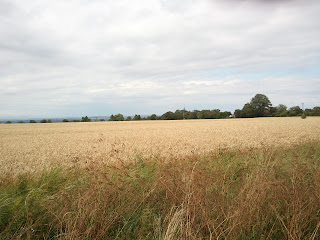 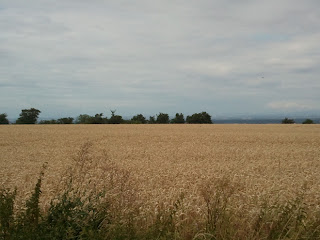 Above you can see the view from the main ridge North (taken from the road between Krechor and Chocenice), the dead ground in front is apparent. To the left of the second picture you can just see the top of the monument. None of the ground was visible to the Prussians until they passed the old Swedish Camp. 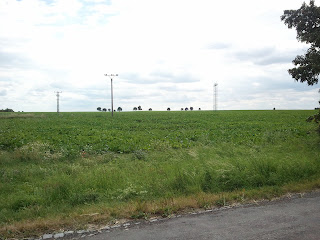 Above you can see the view towards the main ridge (Krechor Hill) and Austrian line (looking South). The Prussian attack would have gone in over the immediate foreground, after they had pushed back the Croatian light infantry. 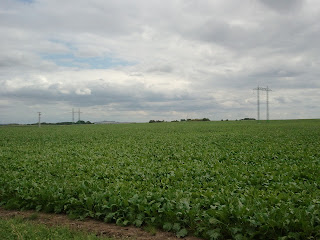 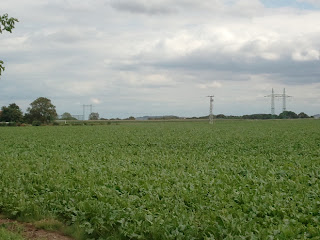 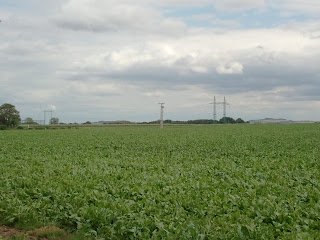 In the three pictures above you can see the view towards the Austrian right flank on the hidden ridge. This is where the original Oak wood stood which anchored the Austrian flank behind the village of Krechor. Here is where the Austrians flank (under General Wied) was driven back in the late afternoon (4pm) by Prussian combined infantry and cavalry attacks (including those by Seydlitz), and pushed almost to the reverse slope of the ridge. After almost 3 hours of charge and counter charge, the Prussians in turn were driven back eventually by the Austrian Cavalry and especially Saxon Cavalry Regiments bent on revenge (the Prussians had occupied Saxony the previous autumn). This began the general retreat of the Prussian army. 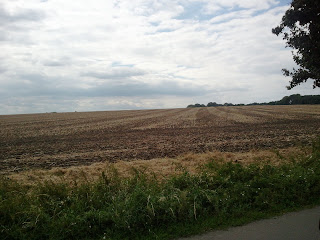 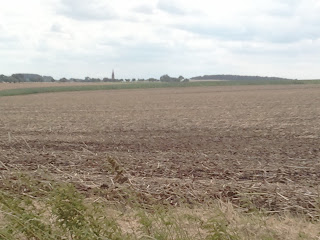 The images above are looking West along the Austrian lines from there right flank. The Oak Wood would have stood roughly in the area of the first picture, where you can already see the beginning of the reverse slope. 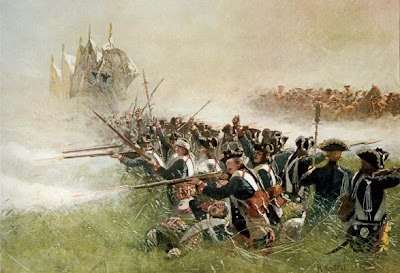 The painting by Knotel above of the Leibgarde probably best captures the scene late in the day with thousands of cavalry milling around, and Prussians being attacked on all sides. 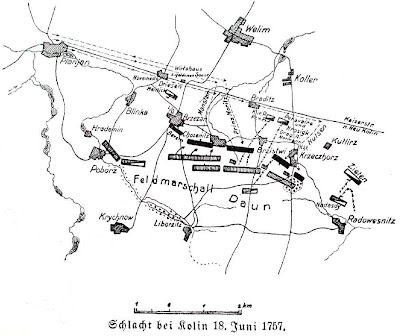 For a better understanding of the battle I borrowed this map image from the Internet. 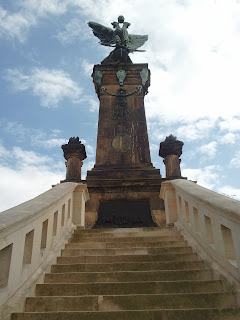 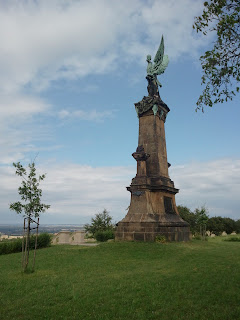 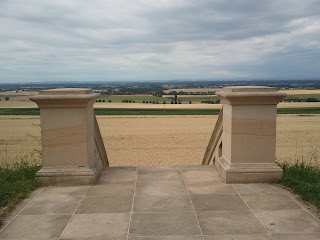 Above you can see the main monument to the battle, on top of the ditch of the old Swedish Camp. 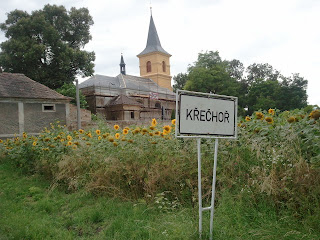 Above the start of Krechor village, and the Church, through which the Prussian General Hulsen's battalions attacked.

In the next post I'll have some pictures of the River Piave battlefields from the Italian front in World War 1.
Posted by The Wilde Goose at 11:57 PM 7 comments: