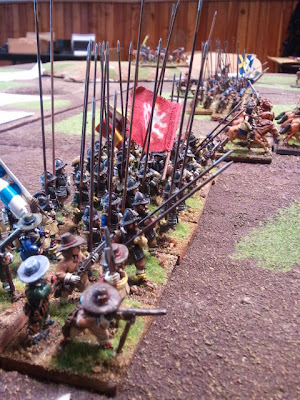 Unfortunately that small little detail - life - occasionally gets in the way of blogging. September has indeed been a tad spartan on blog front, so I thought I'd throw up a few images of the nicely painted toys we used in a game this afternoon at the club in Prague. This was a test game for an updated set of rules Spanish Fury-Pistolado from The Perfect Captain team. 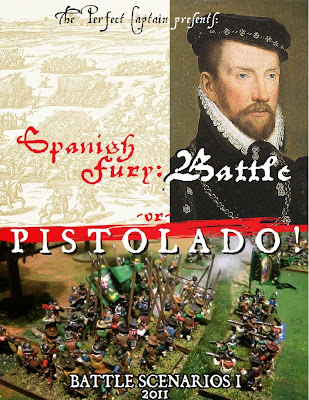 At first site this is a nice looking set of rules dealing with the late 16th Century conflicts of the 80 Years War (wars of Dutch Independence) and the French Wars of Religion (but could be used for any 16th Century conflict). Like all the Perfect Captain rule sets, these can be downloaded for free from here: Spanish Fury Rules

The production values of the various unit cards, counters and scenarios are very high, and it's really just down to the quality of your printer how well they will look. The rules are laid out in the usual Question-Answer format of all the Perfect Captain rule sets (such as Red Actions for example). Frankly I don't like this and it led to a lot of head scratching as we tried to figure out the rules during the test game. Though written for 80 Years war, we decided that they would make a good base for adapting to the 30 years war. 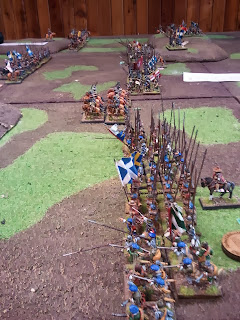 In regard to the mechanisms, once we got through the maze that is the rule set, these turned out to be quite straightforward. All actions are simultaneous, and questions of who goes first in contested sectors is solved by comparing the initiative levels of given commanders and a roll of dice. 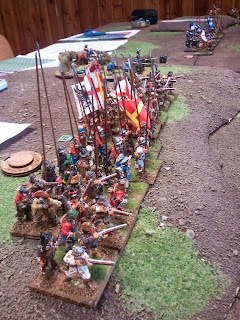 Firing is by size of units cross referenced with the size of the target, with standard modifiers.  Changing formation/ crossing obstacles requires a "Marshaling test" which essentially is to see if the action can be completed or not, and if it causes any disruption. This is quite good and is a fair representation of the difficulties in moving blocks of Pike and Shot. Disruption which is represented by different levels of Cohesion, can also be caused when taking casualties, or if the army morale declines. Decline in levels of cohesion will effect how a unit fires or performs in close combat. This focus on morale and cohesion seems correct. My only quibble is that Artillery seems to be too powerful. Perhaps we didn't understand the rules correctly, but the artillery seemd to be highly effective in disrupting units, which I believe was only tue in a few instances during this period (such as Swedish artillery in one or two battles). 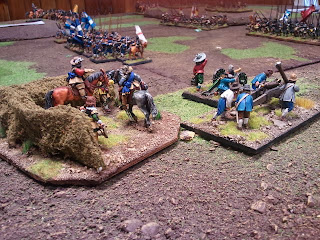 Basic to the rules is that both sides' brigades must have written orders at all times. Changing orders is tricky as well, as they take time to arrive, and depending on the quality or character of the officer in charge, they may decide to ignore or change their orders. Commanders can also doubt there existing orders and try to change them as well in certain circumstances. This to me nicely represents the friction of Renaissance battle. 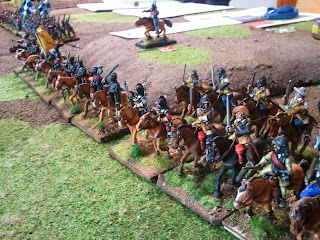 The test battle was a basic Imperials versus Bohemians (with some Swedes thrown in), and took the form of a frontal slog, both sides having assault orders. As said after an hour the game was moving along smoothly. The Cavalry charging/counter charging mechanism was standard and worked well, and the melee results relaistic. What I particulalry liked about the melee and firing rules were that the chance of dice had a lower effect on the outcome if there was a clear imbalance of force; many casualties and disruption to cohesion points were automatic to a certain level if your regiment  was large enough. So "double 1" anomalies were few and far between, and the results realistic to my mind. 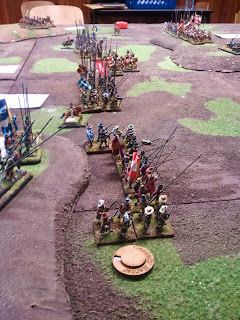 The next task for us now is to create some more 30 year war unit specific cards, and the bigger job of stripping down the current ruleset and to re-arrange it in a more convential format. 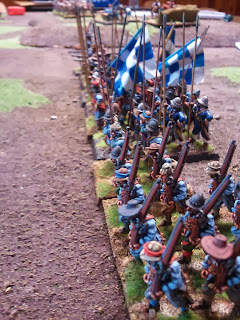 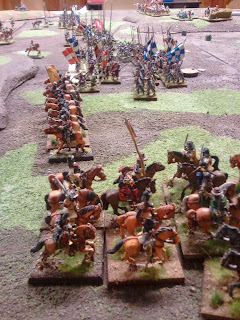 The figures were all from my friend Petr, and were a mix of Perry, Foundry, and Warlord Games, all the flags were hand painted, many on cloth. 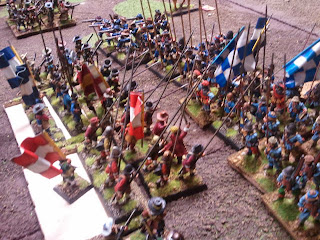 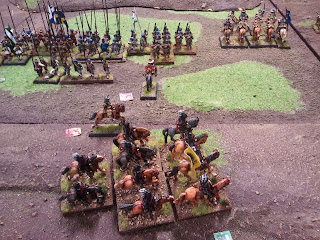