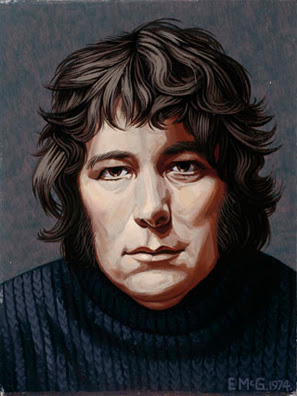 It was with much regret this afternoon that I heard of the death of one of Ireland's greatest poets Seamus Heaney. Of course he did not belong to Ireland, but was part of the broader stream of European poetry over the last 50 years since his seminal first collection "Death of a Naturalist", though many of the motifs he used were taken from his rural childhood.

I had the good fortune to meet him briefly in Prague 3 years ago after a poetry recital at Strahov Monastery (organised by the Irish Embassy here). Considering his immense stature in world literature, he was a very modest, unassuming and down to earth gentleman.  He will surely be missed

The timeless waves, bright, sifting, broken glass,
Came dazzling around, into the rocks,
Came glinting, sifting from the Americas

To possess Aran. Or did Aran rush
to throw wide arms of rock around a tide
That yielded with an ebb, with a soft crash?

Did sea define the land or land the sea?
Each drew new meaning from the waves' collision.
Sea broke on land to full identity.
Posted by The Wilde Goose at 6:46 PM 2 comments: 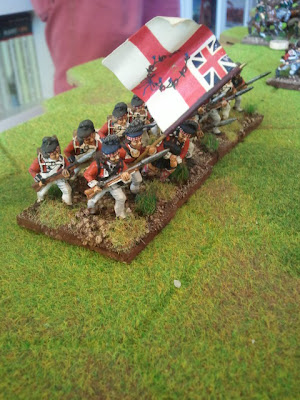 Normally the Prague Wargamers take a break over the summer holidays. Many families in the Czech Republic have country cottages to which they go to during the weekends to  escape the heat in Prague (summers are short but very hot in Bohemia). So from start of June to September wargaming stops. One exception is my friend Petr, who always organizes a game and BBQ. In this instance last week we gamed a stripped down version of the Battle of Guilford Courthouse (or rather a game inspired by it) 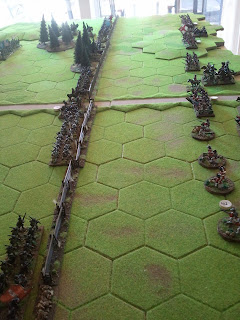 The British, with a smaller but higher quality force were faced by the Americans with a few lines of militia behind fences, in front of a second line of Continentals. To win the day, the British would have to punch through the militia and strike at the Continental main force behind. 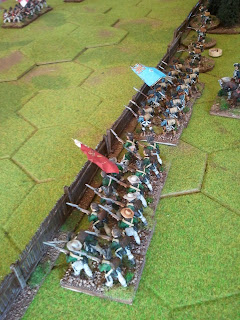 Militia (we can say North Carolina) in the first line awaiting the British attack. 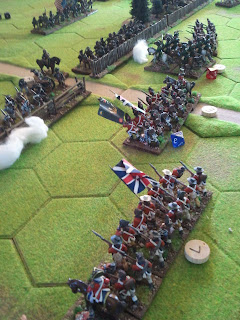 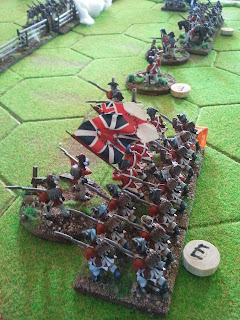 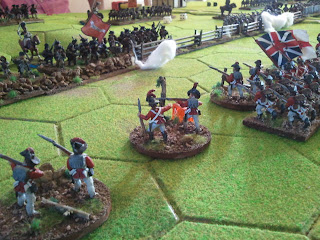 The rules we used were the first edition of British Grenadier. We do have the second edition, but forgot it on the day. We believe the game played more-or-less the same anyway, Disruption Points being one of the key game mechanics. 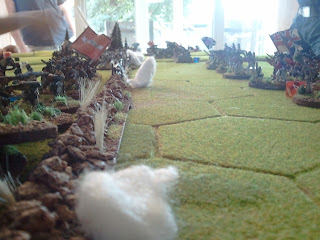 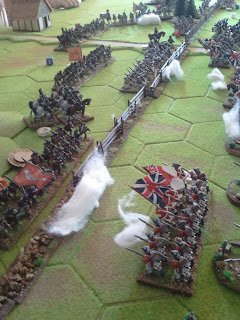 The game played out in a remarkably similar fashion to the actual battle. The British pushed aside the Militia in the centre, but were badly shaken on the right flank as disruption points mounted up, and then were charged by Continental dragoons. 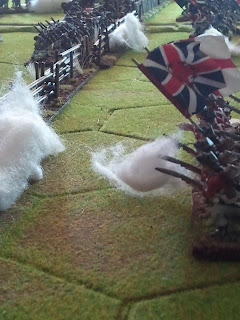 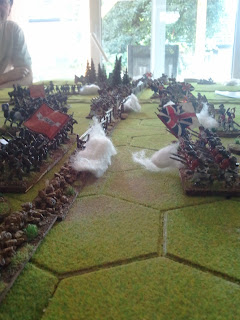 American guns about to be overrun by British grenadiers. 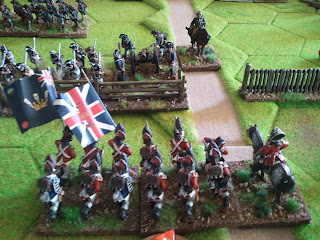 The British open up the American Centre (a militia unit has just routed and disintegrated). 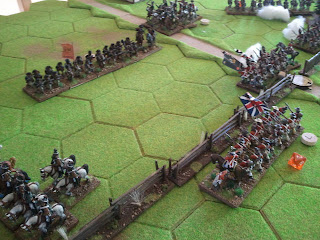 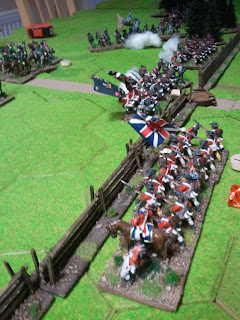 The American centre is forced wider open. At this point the American army was effectively split in two. What followed was the slow and grinding reduction of the American second line 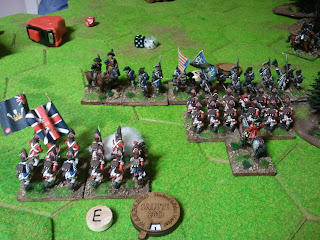 British Cavalry flows through the gap and catches first two American infantry units in the flank, followed by a regiment of American dragoons. The American right flank is routed from the field for the cost of one British battalion (which charged forward unwisely only to be also caught in the flank by American cavalry). 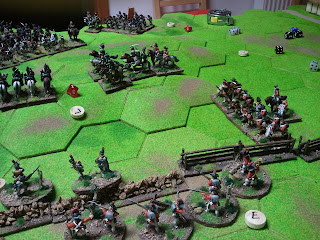 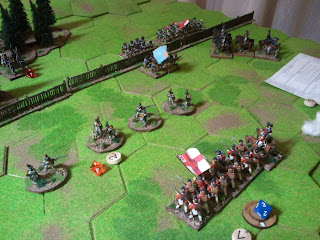 The British right flank in trouble. Already pushed back and close to routing. 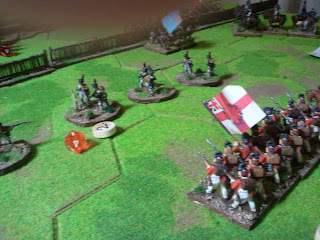 At this stage we called the battle, and decided it was a marginal British victory. The American Centre and right flanks were gone.  They were fighting on gallantly on the left flank, and had forced the British brigade there to retreat (and captured the British guns). However, the British brigade which had stormed and wiped out the American centre were now turning on the American right flank, and had mostly fresh elite troops (including Grenadiers), so it was just a case of when the last American flank would collapse. 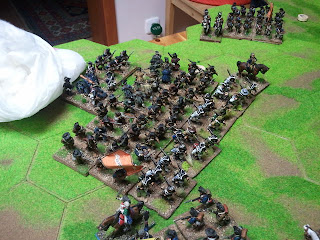 The pile of American lead casualties. 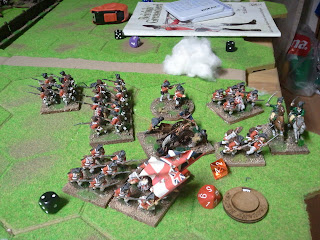 The game played well, and was a tactical victory for the British, though considering the number of British casualties suffered, this would have been a strategic victory for the Americans. As in the actual war, it was the attrition on British units (as successfully advocated by the American General Morgan), and not battles won, that decided the war in America's favour.
Posted by The Wilde Goose at 12:56 PM No comments:

New sculpts and releases over at Orinoco Miniatures

Just to let you know that you can find news of many new releases in the pipeline over at my  Orinoco Miniatures Blog. This includes new Spanish and Gran Colombian Infantry, along with a new range of flags (see image above).