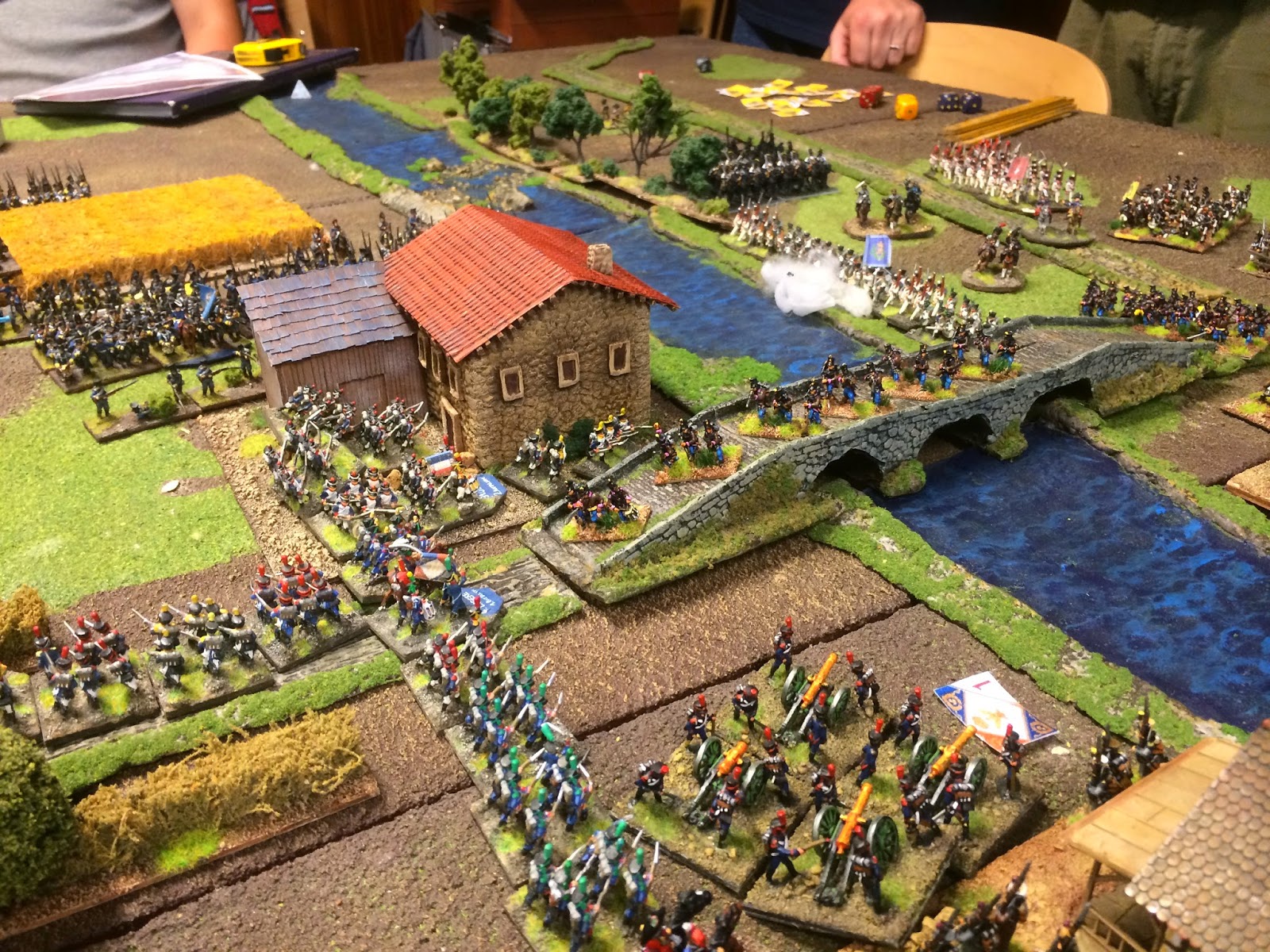 So far 2014 has been a cracking year for wargaming at the club here in Prague. Several large Napoleonic battles as well as getting started in new periods/scales/rules (namely 28mm WW1 and WW2 using various rules from the nice gentlemen at Lard Island, shall we say spreading the lard out east). Of course apologies for my lack of posts over the last few months, due mostly to a very demanding period in the work sphere. This may lead to more intermittent posting. 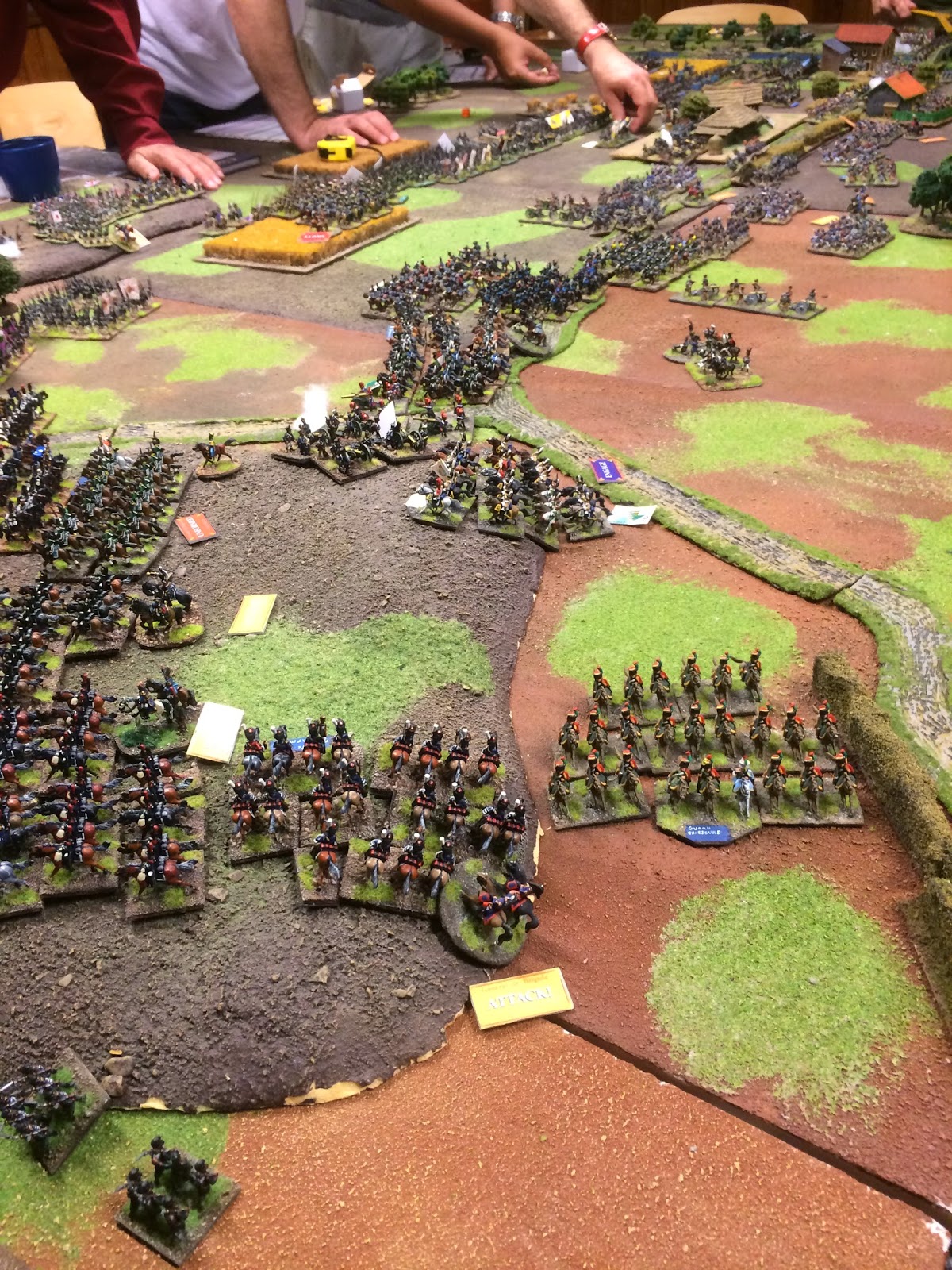 We normally try two big games a year, one to get us through the post Christmas lull, and one before we all head off to the summer homes in July and August. Given it's a year of centenaries and bicentenaries, we chose the Battle of La Rothiere from 1814. 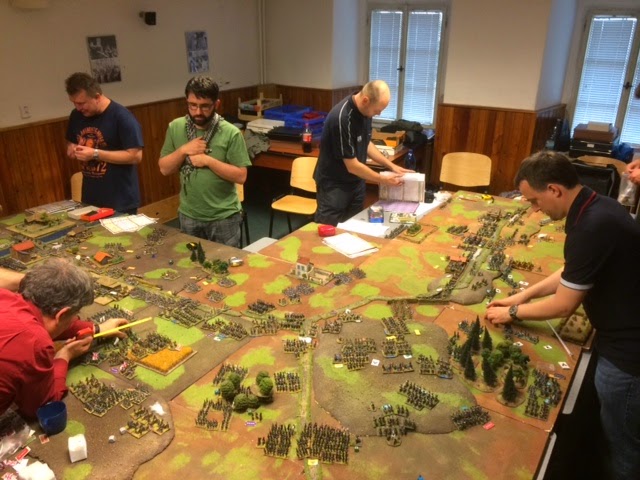 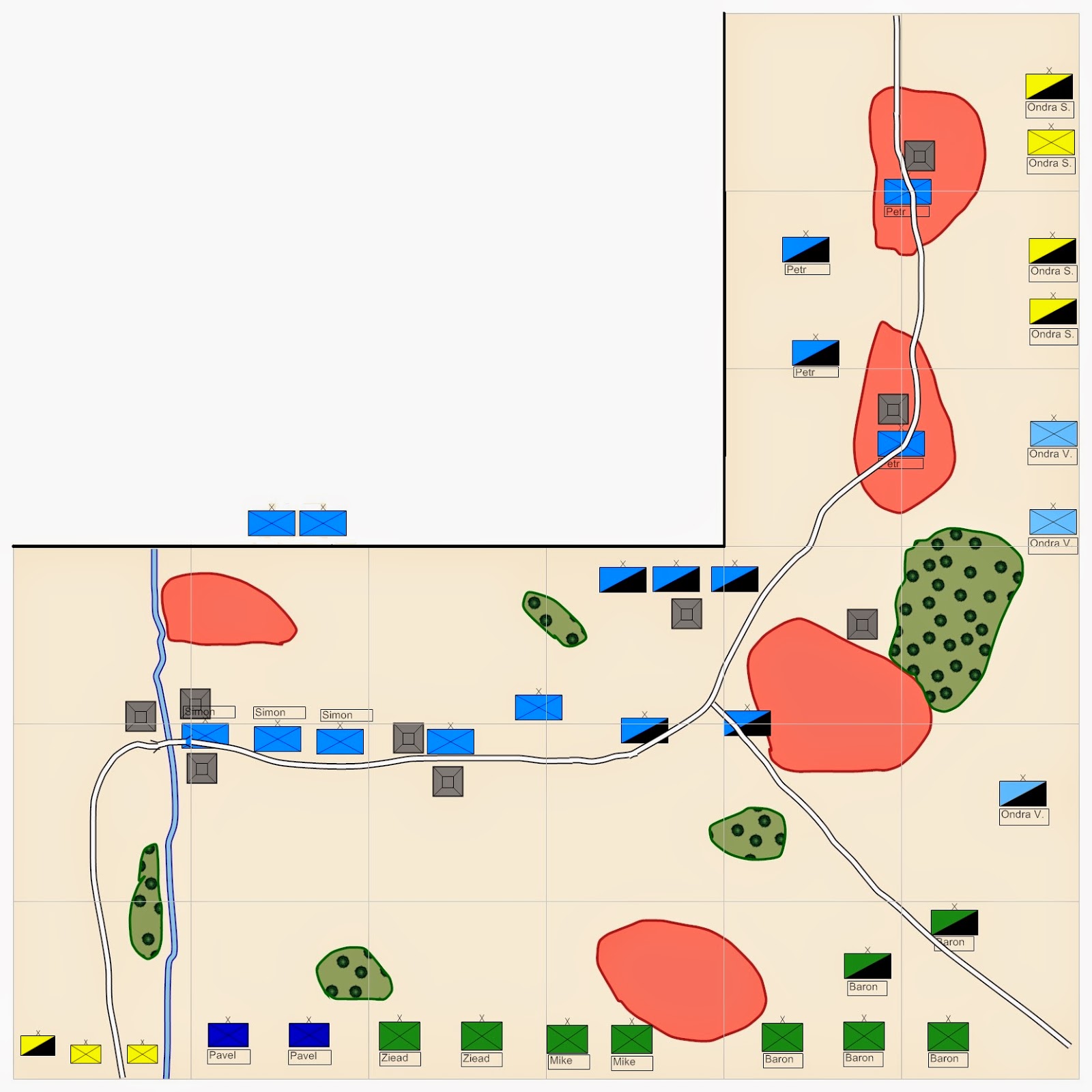 We played this in 15mm, using the excellent General de Brigade Deluxe rules. Considering the size of the game, the rules were very slick. We played almost the full battle out on a 12 x 12 foot L-shaped set up which caught  the main attack from 3 sides of the Allied Armies on the French. I think that the layout really captured the essence of the battle which was a desperate fight for the French. You can see this in the picture and scenario map above, and compare to the historical map below. 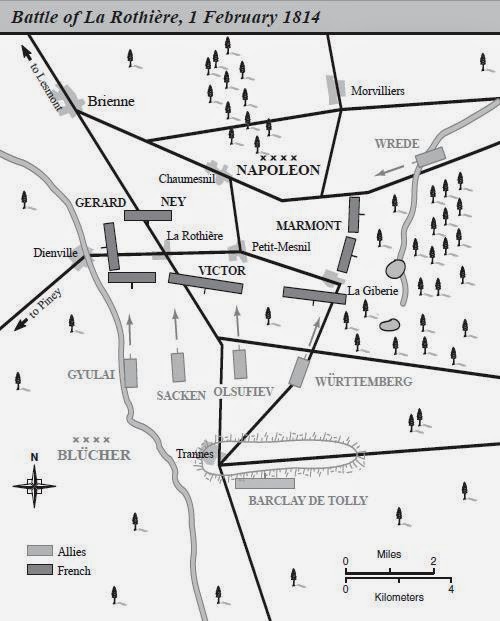 The battle went too and fro, from when we started at 9am, right up to lunchtime. Mostly dominated by the allies trying to turn the left and right flanks (the French were in an extended "U" shape with the wings turned back as you can see in the map above). The Prussians struggled to get over the bridge on the right flank, the ensuing bottleneck meant their numbers never came to bear, and were effectively stopped by the French artillery; and there they remained all day, taking pot shots across the river. 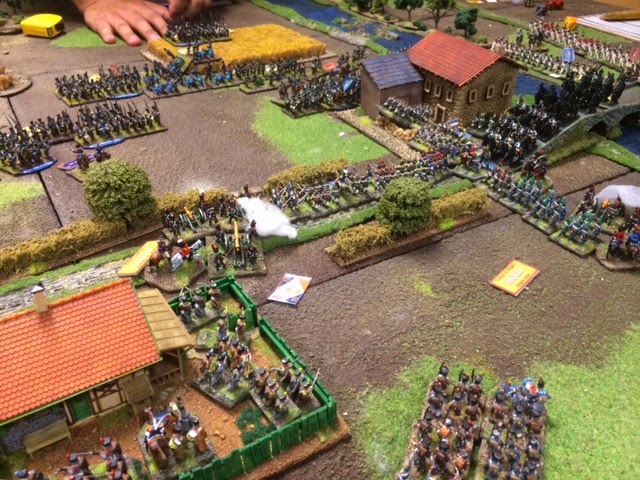 On the left flank it was a bloodier affair, with neither sides infantry brigades gaining the upper hand as the French held on, whilst in the corner apex of the left flank a massed cavalry battle swirled around for a few hours. 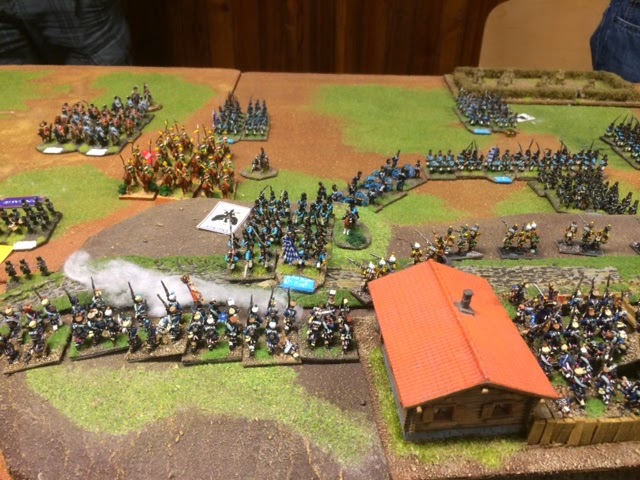 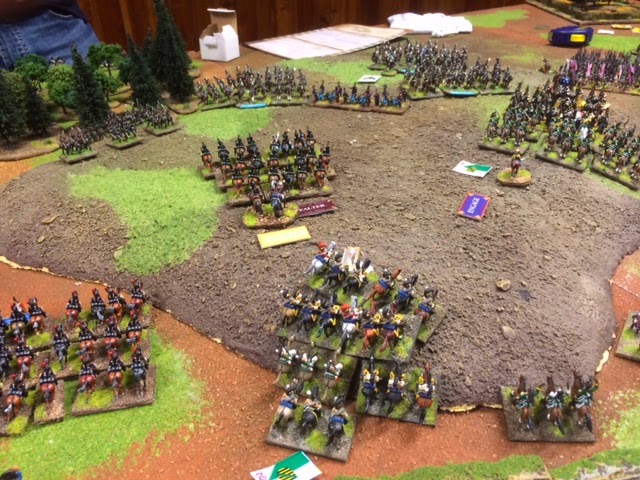 After lunch the allied commander decided to try and punch through the French centre with remaining cavalry, and the main body of the Russian divisions. Unfortunately, the two allied cavalry divisions which had been attacking the apex on the French left had one unit too many rout, and then the first and a few turns later the second brigade failed their morale tests, and both broke, and fled. 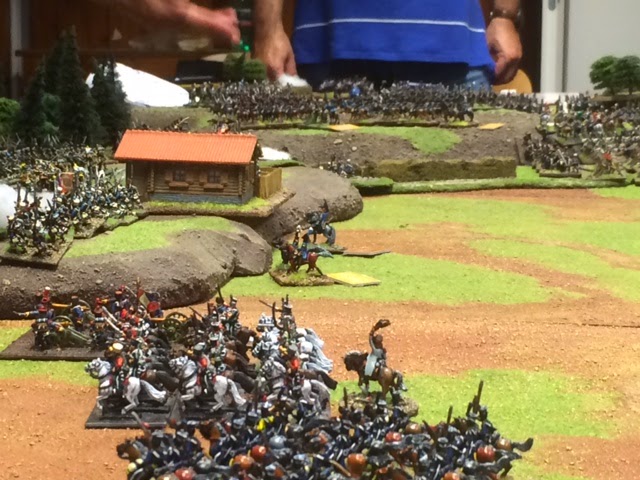 On the far left of the French line, the attacking Austrian and Bavarian brigades were held and then broken on the flanks. French cavalry exploiting the exposed wings and forcing a retreat (you can see the cavalry attack going in above). 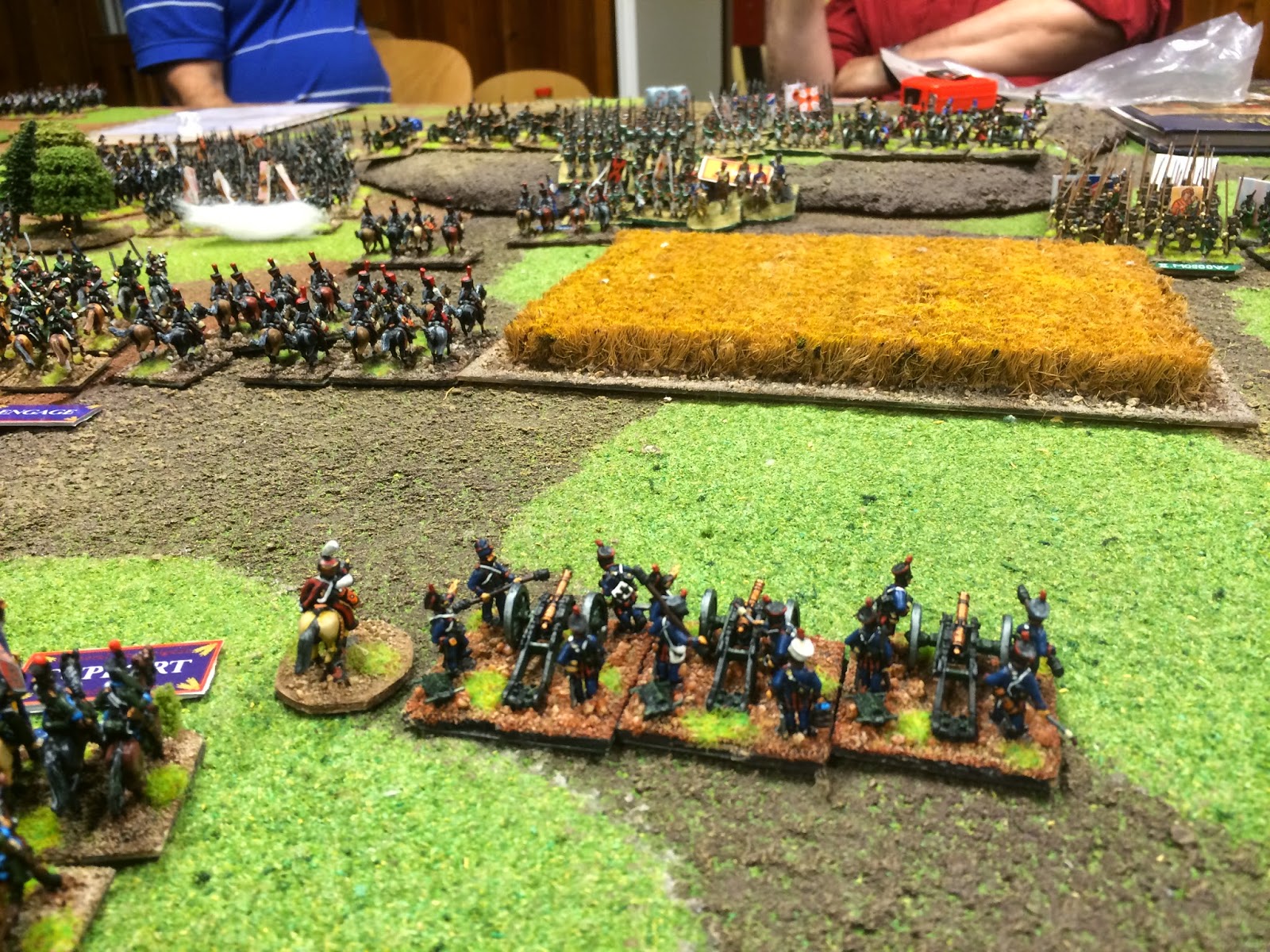 Then in the middle the Russian attack was stalled by artillery and infantry, and then hit in the flank by the French cavalry reserve, breaking a few 2nd class units in the centre, leaving the whole Russian right flank exposed. Hard pressed at the front, with a large gap emerging in their centre and with the French cavalry now pouring in and rolling up their flank, their was little hope for the Allied attack. A few more rounds confirmed the inevitable, and an unhistorical French victory was declared. 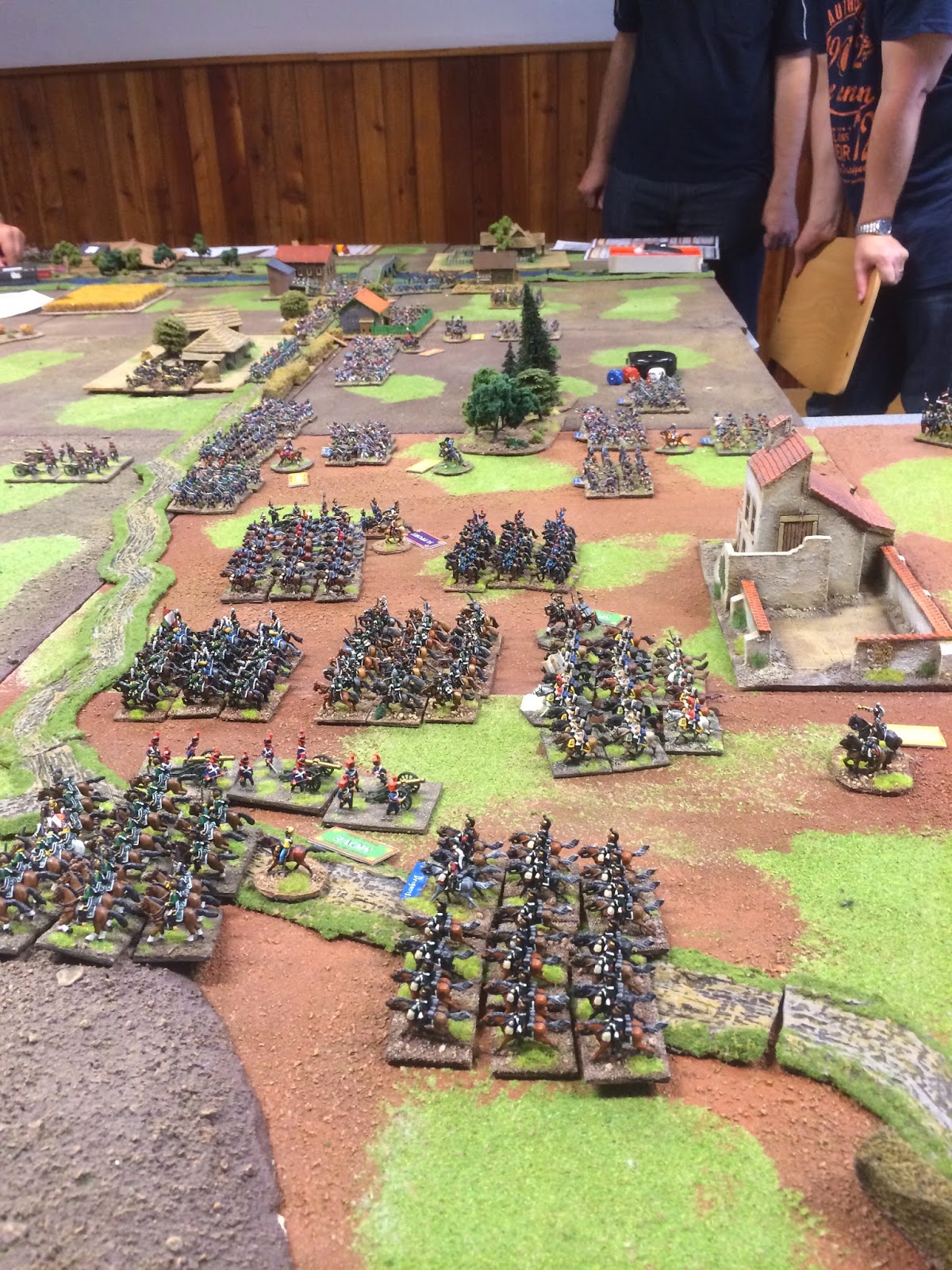 This was really a fabulous day's wargaming, and a very well thought-through scenario by the main organizer Petr. Considering that we had 12 players and well over 2000 figures on the table, we concluded the battle by late afternoon, this was no small feat.
Posted by The Wilde Goose at 9:45 PM 9 comments: