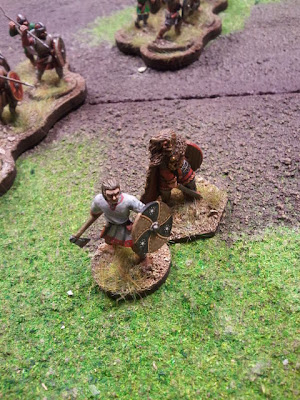 After reading many positive reviews of Dux Britanniarum, and having had great games with Sharp Practice, I got the full set of the game along with printed cards a few weeks ago.  I had already tried out the other "Dux" (Dux Bellorum) a while back, which itself was very good for larger stand alone battles. 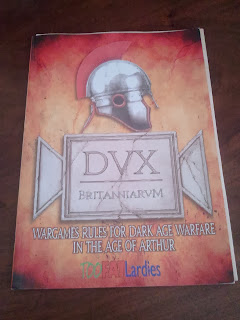 I don't need to repeat in detail the high production values, but it's all there and the cards are a nice touch.  The rule mechanics seem straight forward, as is usual with the Lardies rules stable, while the addition of a separate Fate Deck of cards really makes for a dynamic game. 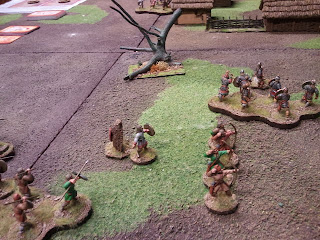 We decided to start with a test game, which was also the first encounter of the campaign. As others have mentioned, the campaign system is the real draw of the rules. This first encounter was a Saxon raid on a Romano-British village. As part of the campaign system the Saxon Lord has to build up wealth (or "Filthy Lucre") through a series of village and cattle raids, as well as raids on wagon trains and Churches. With a sufficient amount of victories he is able advance his social position and eventually bribe his warriors to declare him Warlord. Only via this process can he gain the fighting units and social prestige that will eventually allow him to conquer his first province and hopefully set him on the road to conquer a small kingdom. 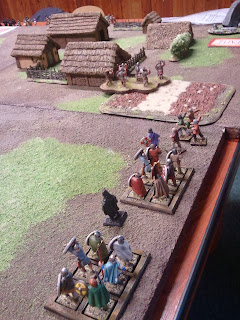 The Kingdom coming under attack was the North British one of Rheged, and the raid was on the province of Caer Brogwm (just south of Hadrian's Wall in what now would be Cumbria). The Saxons were attacking from Coriosopitum in the old Kingdom of Bernaccia (current Northumberland) which had recently fallen to the Saxons. 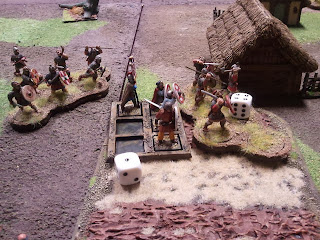 The task for the Saxons, pretty much like a modern bank robbery, was to get in, find the stash of gold in the village and get out quickly. The objective of the British was to stop, catch or hinder them in every way possible (basically try to wipe them out). 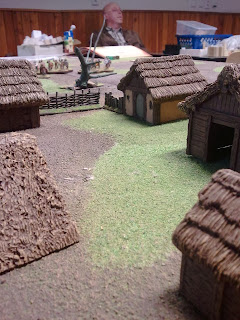 The Saxons were led by a new Lord, Aethelfrith (pictured at the very top with his champion), who was on his first raid, supported by two other nobles, Eadric and Theobold. As you see, in the rules there is a character generation procedure before the campaign begins. This is a nice touch, and gets you closer to "owning" your force (the characteristics that you have to roll for will also effect how they perform in the battles and campaign). 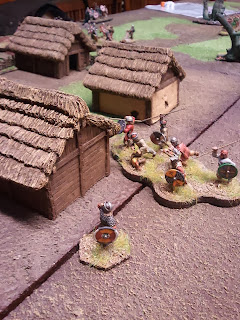 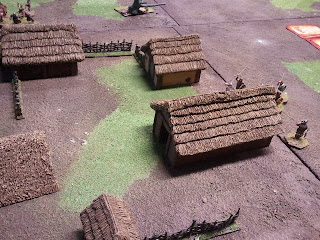 In this particular raid, the Saxons managed to get a four turn head start before the British turned up. This was enough to get the second-in-command and a band of warriors into the village to start searching for the gold (Eadric above cajoling his warriors to find the loot). 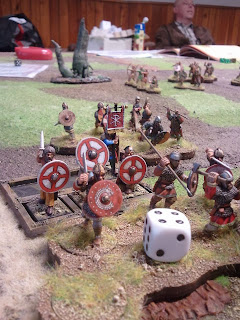 The British when they did arrived turned up in the middle edge of the table, half way between the village and the escape route for the raiding Saxons. They then proceeded to slam into the back of one unit of Saxon Elite Warriors (see the picture above), who lost a few casualties, but more importantly took a lot of shock points, indeed many more than they had men, and so triggered what was an automatic rout (called "Losing your Amphora") from which there could be no rally (the remains of the unit rout below). 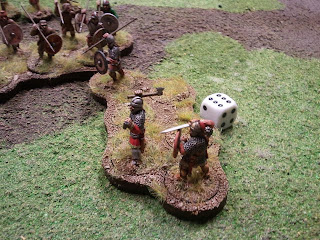 To stall the British further I sent a combined unit of two Warrior bands, with the attached Saxon Lord and his Champion (this gives multiples of points in Close Combat). To this was added an "Aggressive Charge" Fate card which added more advantages, though the British played a Shield wall Braced Fate Card as well, plus the British in Shield wall will always ignore the first kill inflicted on them. Now the Fate Deck cards, plus some good dice, can be key to any encounter and are at the heart of the combat mechanism. Each side get 5 cards at the start of the game, and can use the cards or hoard as needed. Each of the cards confers a certain tactical advantage in combat (or evading it). In some instances you can play multiple cards in one Close Combat, but each noble can only pick up one card at the end his activation, so you have to be careful how you use them. 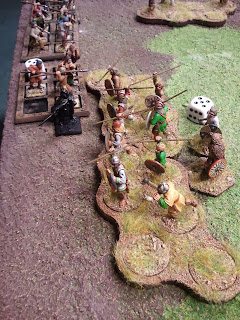 Anyway, in this instance the Saxons manage to rout one unit, though the second held. In the next few rounds of combat though, the British Shield wall wore the Saxons down and they finally routed. 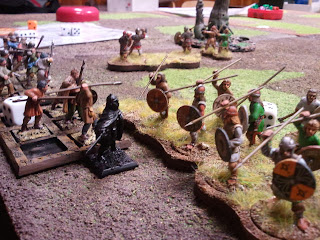 During this period of fighting the other Saxon warband was searching through the village and finally after 5 loot tests to find the gold came up trumps and started the long journey back off the table while trying to avoid the British (you can't fight and carry bags of gold at the same time). 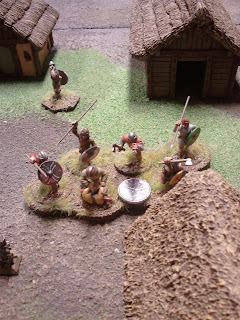 Now the other thing that was happening was that the Saxon army morale was slowly counting down. With each routed unit the rest of the force has to take a morale test, the result of which will reduce army morale. Once army morale gets to Zero then the whole force abandons the table. Each starts the game with a morale of 5, and then with some dice rolls during the start phase this can be pushed up to a maximum of 9. Lose a raid, and in the next campaign games your force starts on a -1 to morale, encouraging the player to be a bit cautious. 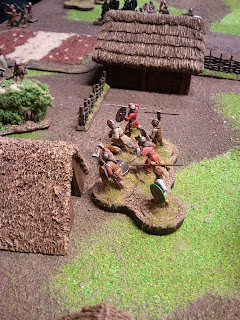 In this case, the rout of one Saxon unit dropped army morale below zero, and the Saxons fled the field pursued by the British. They had taken moderate casualties which meant that it would take 2 campaigning months for the force to recover. The British as winner got to keep the gold and some more from the Saxons, and could replenish their losses faster, thus giving them a free hand in the next campaign month. If the Saxons had won, they could have had an unopposed raid the following month to increase wealth, and with that perhaps increased the lord's status and even hired extra units for the next raid or battle. I think this gives you an idea of how good the campaign system is, and how it informs the table top game.

I really can't recommend the rules highly enough. All the figures and buildings were from Gripping Beast, apart from Aethelfrith himself, who is a really well sculpted figure from Musketeer Miniatures.
Posted by The Wilde Goose at 9:23 PM