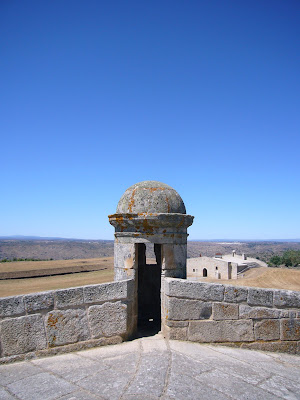 The fortress of of Almeida is perched high on a plateau over the Coa river, guarding the main road from northern Spain. like it's sister Elvas in the south, these fortresses were constructed soon after Portugal regained it's independence from Spain in the mid 17th century. An investment to make sure that affairs stayed that way.The same facts on the ground applied once you threw Napoleon and the French into the mix 150 years later, so that the two corridors (Almeida-Ciudad Rodrigo and Elvas-Badajoz) became the scene of some of the major battles and sieges of the Peninsular War 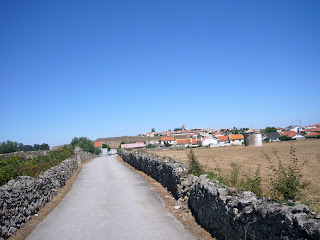 As with most of this region, both sides of the Spanish-Portuguese border  is made up of poor farmland, small villages and allot of dry stone walls. Above you can see the road leading up to Almeida after the short drive from Fuentes de Onoro, through the border post at Vilar Formoso. You can just make out the Glacis surrounding the fortress. 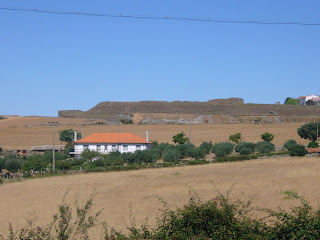 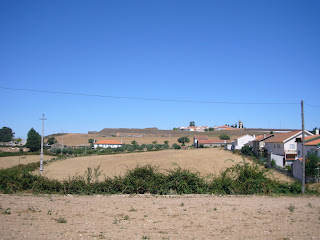 The fortress was the scene of two sieges during the peninsular War, the first in 1810 when it blocked Massena's path during the Third French invasion of Portugal. During the siege a "lucky" French shell landed in the main magazine sited in the medieval fort in the centre of town. The ensuing explosion, knocked a few gaps in the southern rampart as well as killing and injuring about 500 people, and flattening most of the town. The fortress surrendered soon afterwards, and Massena continued his march south to be finally stopped at Bussaco. The second siege was in 1811 with the roles reversed. This time though there was no explosion, and the French garrison actually sneaked past the British pickets during the night and made their escape. Very close to Almeida is the river Coa, where Craufurd's Light Division had a lucky escape after coming up against the main body of the French Army. 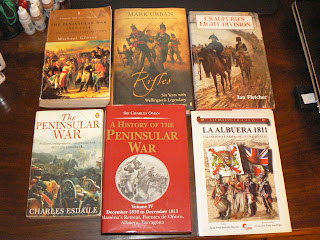 Now for all these blogs, one cannot really manage to talk to the veterans, at least not without holding hands around a table late at night... So for any appreciation of the various battlefields and fortresses I've rambled over, I've relied on a variety of different accounts, some drawn from eye witness accounts, others on secondary sources, and so try to get a balanced view of what happened (e.g. Oman is thorough, but I'm not sure he really understood what was happening in half the battles he covered. Seems to have applied an insight in to Naval tactics when looking at the battles - the Thin British red line, crossing the French "T"). More importantly, when you actually walk the terrain, you can add your own personal insight, appreciating the lie of the land, and get a feeling of what must have been going on in the minds of both the commanders, and the rank-and-file during battle. The source of books on the period is endless, but above you can see some of my reference material (thank you e-bay). 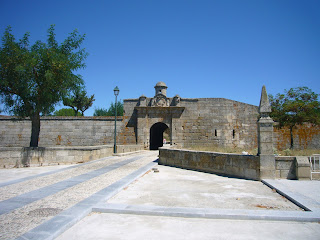 Almeida today is in fairly good nick, well preserved, and pretty much has the feeling of an open-air museum. I'm not sure if many people still live within it's walls, but it was bustling with a market the day I passed through. 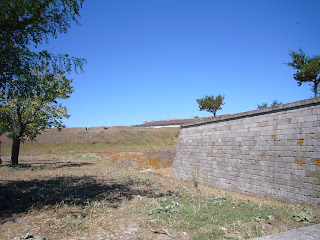 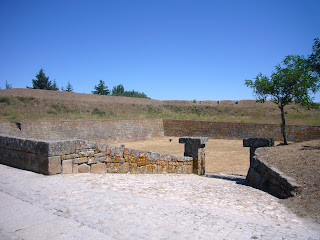 Below you can see the main inner gate. 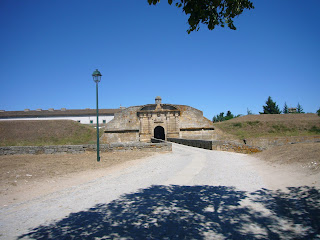 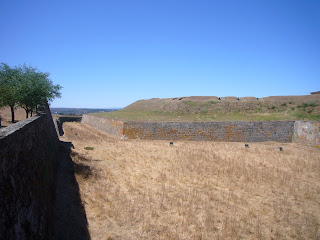 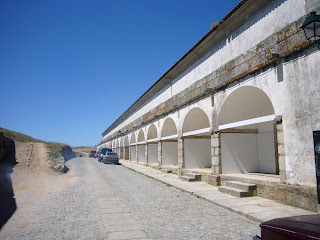 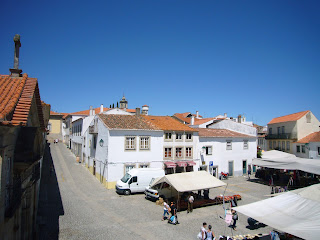 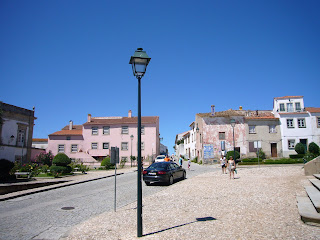 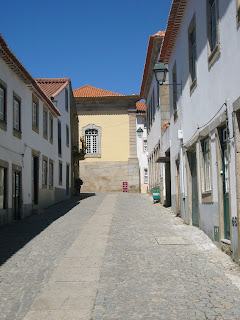 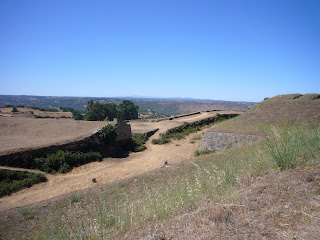 You can still see some of the damage at the back of the Ravelin below. 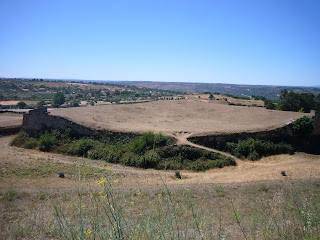 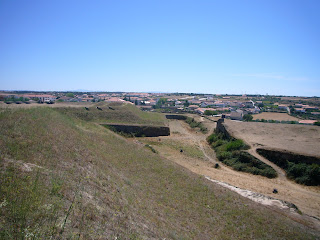 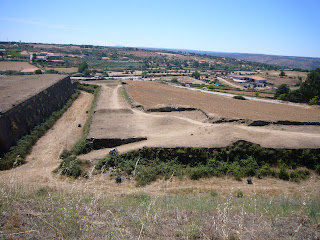 Here you can see the remains of the medieval castle (which was the arsenal/gun powder store) which disintegrated during the first French siege. This was the magazine was housed that was hit by the stray French shell. The foundations are still clear, and the it looks like somebody cut the top of the building off with a hot knife. Apparently it looks little changed since the time of the explosion. 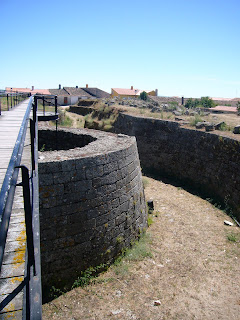 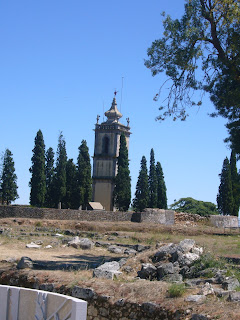 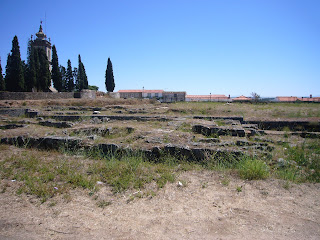 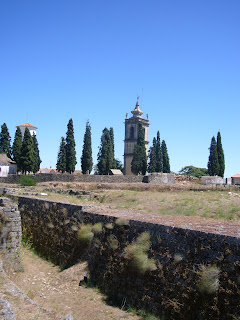 You can still see in other sections of the fortress not touched by the explosion how impressive the defences are. In most respects it is a classic Vauban like fortress. 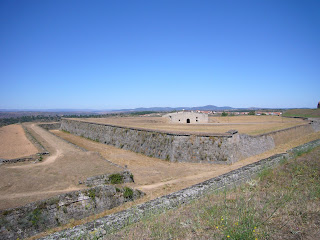 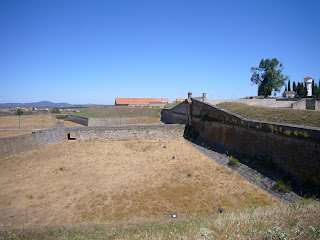 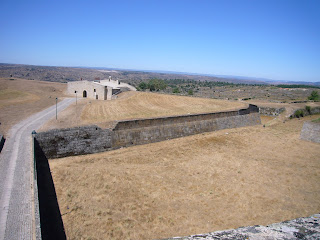 The town is worth a visit, but you’ll need a car (actually, you’ll pretty much need a car to visit most of the sites listed). The small town within the walls, that again, like Ciudad Rodrigo, is largely untouched since the Napoleonic period (apart from the rebuilding after 1810). There is also a small military museum which I was told is supposed to be very good (as related to me by the curator of the Museum in Vimeiro).It was closed during my visit. 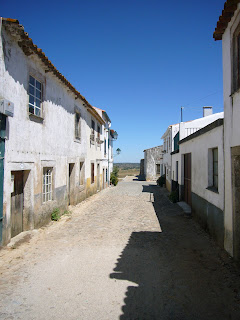 Driving out of Almeida on the way to Sabugal, the new road passes by the original bridge over the Coa, which was the site of the Light Division’s rapid retreat after nearly being trapped with the river at their backs. 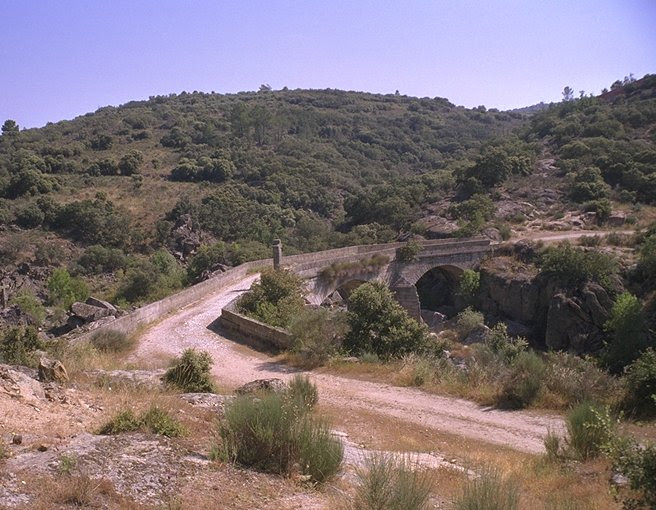 The landscape here is really wild, barren and rocky; actually perfect light infantry country. Unfortunately you can’t stop at this point in the main road, so no chance for a photo, so here is one borrowed from the Internet :-) (Thanks to the Napoleon Series if they don't mind. I will remove it if it is copyrighted)
Posted by The Wilde Goose at 11:56 PM