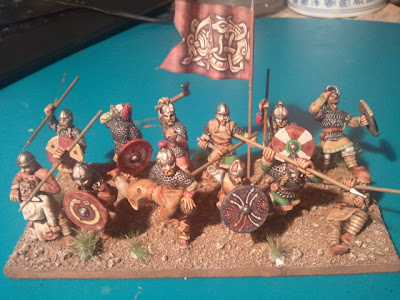 So after a bit of post-Christmas procrastination I finally  finished my Early Saxon Army for Dux Bellorum (all Gripping Beast except command pack from Musketeer Miniatures), and ticked off one of my New Year's resolutions. In the sense of the Philosopher/Sociologist Bordieu I inflicted a bit of "pedagogical violence" upon myself; that is set myself an agreed date to play-test the Dux Bellorum rules down at the Prague Wargames Club before the army was finished, and thus accept the pain of prolonged painting over a short space of time. Now the bases still need a good and proper flocking... So I'll post up the eye candy when they're ready. 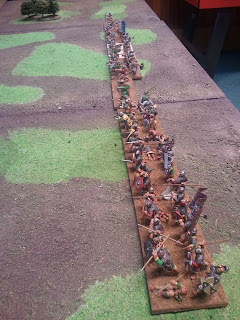 The Saxons lined up on their "muddy" bases.

Anyway, back to the test game. This was our first run at the rules. I'd read them through about twice, but could I remember anything on the day? No. So the rules passed their first test in terms of ease of reference (the booklet is not that hefty), though they would benefit from an index at the back. 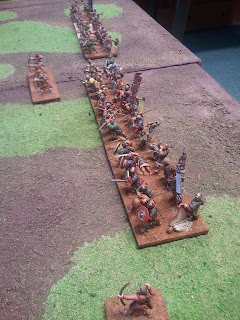 My opponent was Pavel, who seemed to remember a few more of the rules, which speeded things up. He fielded his late Roman 32 point army on the day, and had a worrying amount of cavalry that my foot only force would try to deal with. 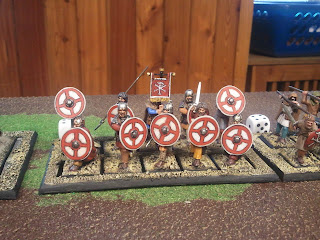 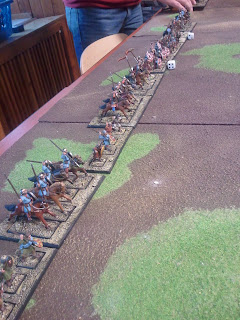 The set up was intuitive, and a quick dice roll and adding in aggression level of armies decides who is the aggressor and defender (important for the sequence of handing out Leadership Points (LP's) each turn). There are also a list of scenarios you can play at the back of the rules.  Now the LP's are the key mechanic in the game (plus of course a fair bit of dice rolling). The LP's are a bit similar to pips in DBx, but how you distribute them adds a nice tactical element to the game. Your  army gets 6 LP's as a basic (to which additional LP's can be purchased instead of units). You then distribute them at the start of each turn, unit by unit, first the defender (or repeller) awards LPs to one unit or group, and then the attacker (aggressor) and so on. Once awarded they cannot be moved (unless you have an experienced warlord who can reallocate 1 LP at the end of this phase. So if the attacker puts a few points down on the left wings, and the defender matches with more points on that wing,  and the attacker then loads up all the rest of his LP's on another wing, he can outwit the defender, and use the local LP advantage on the other wing to press home an attack. 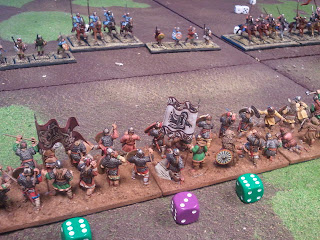 Tracking Cohesion and Leadership points with differently coloured dice (a slight chore in the game). 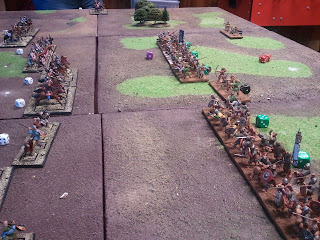 The LP's are also used to reduce the effect of hits on a unit, and thus reduce the potential damage to cohesion. Once the manoeuvring is over and the units get into slogging at each other, this is where the LP's start to be used. Once you get enough hits and a units' cohesion goes to zero, then it is removed from play. Each unit removed also removes one LP permanently from the game for that side. I'm sure there are multiple strategies to be discovered in using the LP's (as well as learning the rules fully). 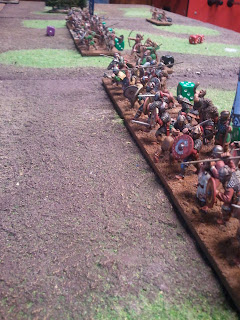 The rules gave a satisfying game, and we almost got to a conclusion after just 2 hours of this first game (the better protected late Romans were pushing back the Saxons, who had 2 units of more brittle warriors/warband about to lose their cohesion, and be flanked at the same time by the Roman Cavalry). They felt "right" in regard to a dark ages battle, with some manoeuvring before the battle develops into a slogging match. This though does not last for too long as the hits quickly start to reduce cohesion points, so at one moment several units can melt away at once (simulating an armies breaking point and devastating rout). I'll write some more on the rules once I have fully digested the trial game, and get a few more games in over the coming weeks; but full marks so far. 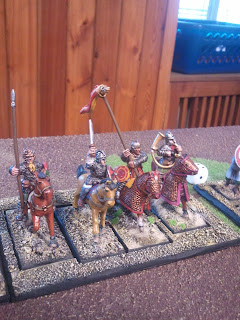 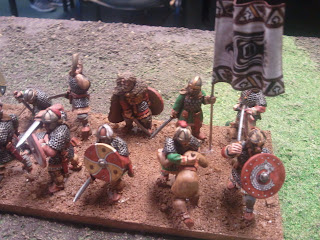