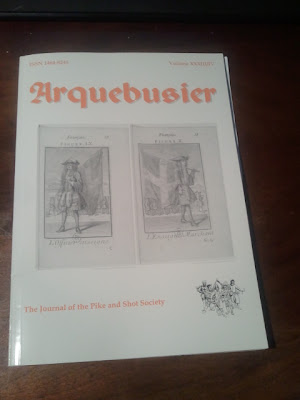 I  just received the latest edition of the Arquebusier journal from The Pike and Shot Society. This is really an excellent publication focusing on Renaissance and late Renaissance warfare up to the early baroque period of Marlborough (there were still pikes floating around the Baltic at this stage). I can't recommend it highly enough.

Anyway, the point of the post is that one of the articles focuses on a proposed army list for the English Civil War ("An Experimental Army List, Royalist Oxford Army, Newbury Campaign" by Charles Singleton). What caught my attention was the last paragraph with an interesting rule change for the Pike & Shotte Black Powder armies for the ECW/TYW period, which I quote below:

"Experimental rule for infantry - a suggestion - In order to reflect the much closer co-operation between pike and shot in the first half of the seventeenth century, remove the pikeman listing from the army list and add 'pike company' special rule to musketeer listings. This would increase the cost of musketeers from 44pts to a base of  49pts. Simply depict them as a pike block with two wings of musketeers." 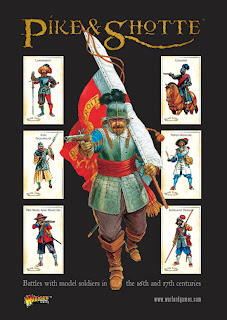 Now I don't own a set of the rules, but have read through a friend's copy and found that I couldn't agree with the separation of pike and shot into what seems like separate units. I've reenacted the period, read through contemporary drill books, and wargamed with Forlorn Hope. All accounts agree that the regiments acted as one unit - pike block in the middle with musketeers on the wings. The ratio of pike to shot varied from campaign to campaign, as well as the formation of commanded shot and dragoon units which fought without pikemen. So it seems to me like a major failing of the rules. The current interpretation of unit formations in the rules as they stand are just wrong in my opinion. If I have misinterpreted what I have seen then I will in due course be corrected :-) Anyway, the experimental rule if expanded on could make Pike & Shotte  a perfectly good set of rules for the pike and shot period.
Posted by The Wilde Goose at 9:00 PM